This recipe was given to me by a friend who has a middle eastern restaurant in Plano, TX: Texas King Cafe & Grill. I see pictures of their dishes show up on my Facebook feed from time to time and they always look delicious. About a week ago, I saw something in particular that caught my eye: Chicken Kofta Masala. I was unsure of what “kofta” meant at the time but I knew “masala” is a spice mix or a curry. I had to have it and since I live nowhere near Texas my only option (other than flying out there) was to make it myself. All I had to do was ask for the recipe- they were more than happy to oblige by sending me the recipe and answering all of my questions about it (and there were many, lol). So a big thank you, I love this recipe!

It turns out, Kofta if basically a middle eastern meatball, usually served with a spicy gravy (or when served dry, considered a type of kebab). It is true then, Italians are not the only culture with a culinary heritage including some sort of meatball. It seems that most cultures have some form of the dish, putting their own twist on it. In India they are sometimes made with fish or are entirely veterinarian. In Sweden they have those delightful little meatballs served in a creamy nutmeg-studded sauce. Meatballs have long had their foot in the door throughout Africa, Asia, Germany, Mexico etc, etc. I feel informed. But I feel quite lucky to have been given this wonderful recipe for “meatballs”.

You can think of kafta masala as a kind of curry. In fact, you may find it labeled as such when you go to purchase it. Mine is called Spice Mix for Kofta Curry and is from a manufacturer called Shan. You will find this at Indian/Pakistani grocery store, online or maybe even in the international section of your local mega mart. While you’re there, you might want to grab some basmati rice and some naan bread to serve with it (Even better: try making your own naan bread! I did with spectacular results!) 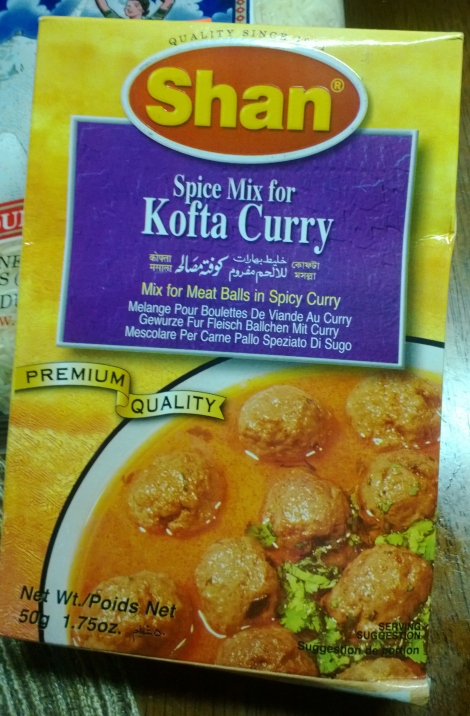 This is a spice mix, so yes I’m sure you could look online and come up with a recipe for the actual mix but I don’t have most of the spices on hand in my pantry (maybe someday?) so I opted to buy this premixed packet. It contains things like coriander, green cardimum, red chili, roasted powdered chickpea, fenugreek leaves, papaya powder, you get the idea. I have the chili powder on hand! But that’s about it, so rather than purchase all of these I say go with the packet. It cost me 99 cents!

The meatballs are composed of ground chicken, some of this kafta mix and a puree/paste of onions and jalapeno. You have a lot of control over how spicy this dish will be from start to finish, like in this step. Go with more jalapeno if you want it spicier or visa versa. My measurements are kindof middle-of-the-road-but-leaning-towards-pretty-spicy. I thought I was more tolerant to spice until I got halfway through my bowl of this and realized I should have added more yogurt to cool it down a bit! Again, an easy thing to remedy. I’m thinking my friend who gave me this recipe would call me a wuss though, as I cut down the spicy elements from the version he gave me even before wanting to add more yogurt!

Anyway, these meatballs need time to chill in the fridge because there is not “traditional” binder in them. Traditional all seems so irrelevant now as apparently Italian meatballs are not the “standard” or even the oldest form of meatball! Let these sit at the very least 4 hours but it’s better if you can let them sit overnight. The meat will stay much firmer this way and won’t fall apart on your during cooking. Make the meatballs smaller than you would an Italian meatball as well- that will also make them more manageable. The results will be worth it! They are super tender, juicy and flavorful!

Meatballs about to take a chill: i reformed them after chilling to tighten up the shape a bit.

The gravy they are served in is made with the remainder of the kafta spice mix, yogurt and a puree of tomato, onion, garlic, ginger. I did not make a typo in the recipe below: you will use a whole head of garlic (not a clove) in this recipe. I’m not talking about a whole head of elephant garlic, just a nice middle of the road sized one. I used a small head and next time I will up that even a bit more. The meatballs cook right in this gravy and absorb a lot of it’s yumminess. The garnish of cilantro below is not labeled optional because it goes so well, and really accents the flavors in this dish. It also adds a brightness that would be missing otherwise. I sent an early version of the recipe to my friend to proof read for me and it said “optional” for the cilantro garnish and he wrote back and said that “it’s really not [optional]”. Point taken, and I’m glad I listened! After all, there is coriander in the kafta mix which is dried cilantro. Hard boiled egg is also listed as an optional add-in which I have not tried. Apparently this is a very traditional add in for kafta in a lot of countries. I have been told it will add a very different flavor to the dish, which I am curious to try. He said that the eggs can be added in, halved, right before presenting the dish, or even put in whole.

This will make approx. 40 small meatballs which is a lot so you have a few options: prepare as stated to feed a crowd, cut meatball ingredients in half (but not the sauce ingredients), or form all the meatballs and freeze half for later (freeze before cooking by placing in a single layer on a parchment covered sheet pan in the freezer until frozen, then transfer to an airtight container or ziptop bag). I opted to freeze half. I plan to cook them under the broiler at a later date (after thawing them) and serve them as kebabs or cook the sauce again and re-live this meal (very happily)!

Ingredients for the meatballs:

Ingredients for the gravy: 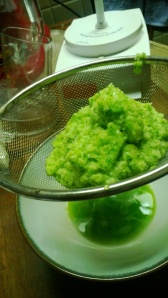 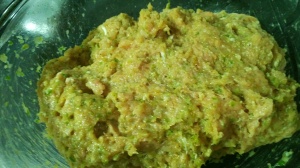 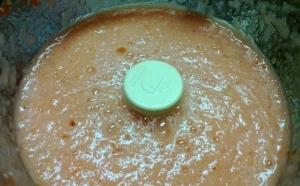 uncooked meatballs in the gravy

I do hope you try this dish. I love middle-eastern and Indian cuisine. Curries in particular, which this is. Enjoy 🙂

I realize there is a lot to read an taking in in this post so I will put the naan bread recipe and instructions in a subsequent post. I am glad I tried making my own naan though, it was quite gratifying, delicious and actually cheaper than buying it at the grocery store. It goes perfectly with this meal and it’s great to take a bite of when your mouth is tingling from all the spices going on!

And please do check out the Facebook page for Texas King Cafe & Grill! They are always posting pictures that get my mouth watering. I wish I lived down there sometimes just so I could go in and try the food! So if you live in Texas (especially near Plano), make a trip out to see ’em. If this recipe is any indication of what they have to offer, I wouldn’t hesitate! A special shout-out to Sohail who made this recipe and post a reality for me! Thanks for putting up with all of my questions and naivete about cooking this cuisine: I promise I’ll get better with practice. Thanks a bunch! I’m hoping there will be more awesome recipes from you up here in the near future! 🙂