I just can’t wait for spring weather. I want to get outside. I want to start using my smoker (well, my Dad’s smoker but I still have it)! True, there are still a lot of winter cooking projects to be done that I promised myself I’d get to but haven’t yet (pot roast, Italian wedding soup, ravioli) but today I just couldn’t resist making a traditionally spring/summer meal indoors. It snowed today. So it had to be indoors. No worries, this BBQ feast turned out awesome! I made spare ribs with homemade BBQ sauce and rub, buttermilk cornbread, and easy stove-top mac and cheese. I got to use the pressure cooker again, too! Woohoo! (I heart my pressure cooker!!!)

This post contains a lot of info and recipes so hang in there, it will all be worth it!

I started the night before by prepping my ribs and making my BBQ sauce. You can use baby back ribs but I find spare ribs are meatier, and oh-so tasty (not to mention cheaper). Start off by removing the silver-skin from your ribs which is a liquid-proof membrane/barrier that separates the ribs from the body cavity of the animal. It will also prevent the rub on that side of the ribs from really getting into the meat to marinate it. There is some controversy over whether or not to remove this membrane but it certainly is edible so do as you wish. If you decide to remove it, here is a link to a nice mini-video that shows how to do so quickly and easily.

I decided to “rub” my ribs the night before to allow the flavor to better infuse into the meat but this step is also optional. The ribs will still be delicious without it but it adds a nice coating of flavor and helps to make a nice “crust” when you broil or grill your ribs later on. For my rub I adapted a simple recipe from America’s Test Kitchen: Family Cookbook, “Basic BBQ Rub”:

Mix the above ingredients together and sprinkle and then rub liberally onto each side of the ribs and place on a large sheet pan. Cover and refrigerate overnight. This make a decent amount of rub so you may not use it all for one rack of ribs. 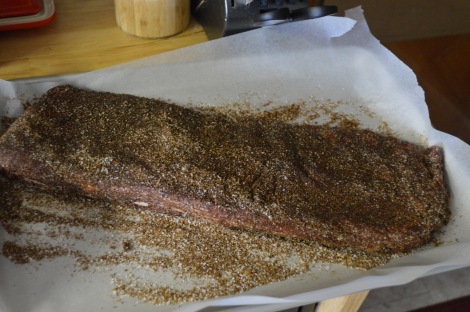 Then I moved onto making BBQ sauce. I adapted a recipe that a friend of mine gave me that had been passed down to him from his Grandfather. It is a Memphis style BBQ sauce, meaning that is is sweet and tangy and not too thick or thin. It has a tomato base with some vinegar, brown sugar and other seasonings thrown in. I tweaked the recipe I based this on a bit to suit my own tastes. I don’t like a lot of heat in my BBQ so I cut back on the cayenne pepper. (I added too much cayenne at first and so spent some time adding more ketchup, etc. to try to cut the “building heat” so start small with the cayenne and add more if you want more). I also added a bit of ground coriander and cumin, just because I like them, and upped the liquid smoke called for since I wouldn’t be actually grilling or smoking the meat. It came out pretty darn good. And a warning, this recipe makes A LOT of sauce! So feel free to cut it in half or in quarters because I still have enough for like 3 or 4 more meals! I plan to freeze or can most of what I have left for use in the summertime! Thank you for sharing this recipe with me Tim, it is delicious! 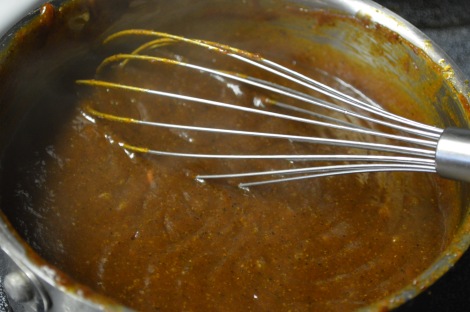 *For a sweeter “Georgia-Style” sauce, add ½ cup of honey before simmering

Stick the BBQ sauce in the fridge overnight and then the next day when you are ready to start cooking, take the ribs and the sauce out. See, if you rubbed your ribs the night before the spice mixture will have formed this nice coating over the meat.

You’re going to cook your ribs in the pressure cooker for 15 minutes and then use the natural release method for the pressure. This will allow for a total cooking time of approximately 30 minutes. (If you don’t have a pressure cooker- go buy one already, they rock! Oooor you can use your slow cooker but it will obviously take a lot longer). You can use whatever liquid you like in the pressure cooker but I chose to use some cola. It was awesome! You could also use beer, that was my second choice! Of course water would be fine too if you want to keep it really simple. I say, why not add extra flavor wherever you can! I added about 3 cups of cola, cut my ribs into 4 rib “sections” and stood them up around the edge of the inside. 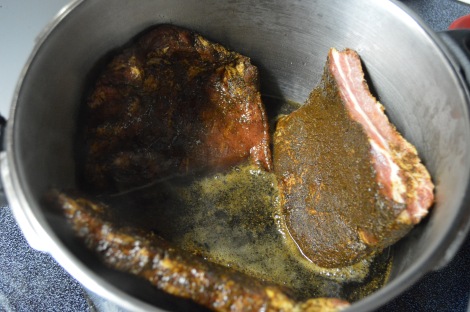 While the ribs are pressure cooking I was baking my cornbread (recipe to follow). Once the cornbread came out, I preheated the broiler on high and prepared a sheet pan with parchment paper lining it. Once the pressure came down in my cooker, I carefully removed the ribs with thongs (they may start to fall apart, they are that tender) to the sheet pan.

I brushed the top side liberally with BBQ sauce and stuck them under the broiler for about 5 minutes, with the oven door cracked open. Keep your eye on it, you want a tiny bit of charring at the edges but you don’t want the whole thing to burn! Remove the pan, flip the ribs, cover with more sauce and repeat with the second side. Then they are ready to serve! Fall apart delicious! I think that this pre-cooking with the pressure cooker will also be beneficial during the summer when you can just finish them off on the grill. You can even do the pre-cooking the night before a get together so your ribs come together really fast!

I am going to try making the BBQ sauce right in the pressure cooker with the ribs sometime. Why not? Then it will have some yummy drippings from the meat as well, and it would act as the liquid while cooking. I’m sure I’ll post about that when I get to it. I did save some of the cooking liquid from these ribs because it is frickin’ delicious! Not sure what to do with it yet but it’s tasty. It would be good mixed in with some pulled pork. But I am wondering if I can implement it as part of the broth for a soup. It is flavor gold! 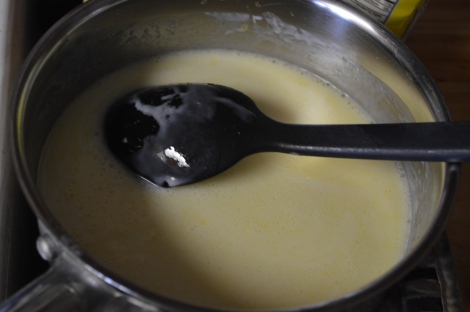 Alternately: If you have a cast iron skillet you can cook this in that pan to get a crispy crust. To do this, preheat the skillet with 1 tbsp. of butter or bacon fat in it in the oven while you preheat it. When the cornbread batter is ready and the cast iron pan is hot, remove the pan from the oven (with potholders please!), pour the batter into the pan evenly and bake for 20-25 minutes or until a toothpick inserted into the center comes out clean.

You can also make some variations to this recipe by adding some cayenne pepper to spice it up, adding some shredded cheddar, adding a handful of frozen corn to the batter and/or adding crumbled bacon to the batter.

So there is one more component to this meal. I needed a side and though about baked beans but realized I didn’t have the ingredients on hand. Then I thought about making potato wedges and was ready to go ahead with that when a little voice in my head cried, “mac and cheese please!”. I dug through the fridge and managed to come up with enough “scraps” of cheese to total the 12 oz. needed for my recipe and off I went! I had been wanting to try the “Creamy Stovetop Mac’ N’ Cheese” from America’s Test Kitchen: Family Cookbook so this was the perfect time. It is a very fast and easy recipe and requires no baking, which is good because my oven was a bit busy, lol. The sauce is a simple mixture of evaporated milk, eggs, mustard, hot sauce (I used Cholula- my hot sauce of choice), salt and pepper. The reason for evaporated milk as the liquid is that is doesn’t curdle due to the evaporation and sterilization process it undergoes for canning. That makes it perfect for achieving a velvety sauce. The original recipe calls for cheddar but of course i had zero cheddar on hand. Instead, I used a mixture of smoked Gruyère, gouda, monterey jack, and a touch of grated Parmesan. This was a winning combination to be sure! The smoked Gruyère was the star of this show and it’s smoky flavor paired perfectly with my BBQ ribs and corned bread! This is a very creamy mac and cheese, which is my preferred type, over the drier oven-baked types. You could add things to this like crumbled bacon, diced tomato or sliced green onion if you like. I think thi will quickly become a go-to mac and cheese recipe for me! 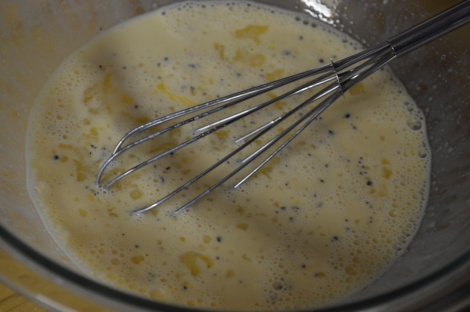 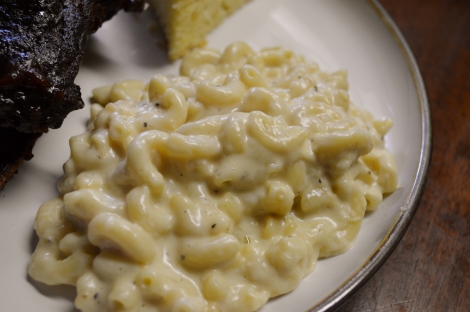