I know it’s been a long time since I’ve shared on here… But I promise it’s not because I’m lazy or anything. Quite the opposite! I have done quite a bit since the homemade sausages, brats and whatnot for the Oktoberfest!

The holidays of course brought with them obsessive cookie making but more than that, a pairing/tasting even that I threw with my Dad, step-mom Tracy and boyfriend Troy. So it was a bit of a chaotic time. I won’t get into that too, too much right now, I have other things to discuss!

My younger brother, Andrew, just married he love of his life, Tasha, on May 30th in the rose garden at the Norfolk Botanical Gardens. It was a beautiful and surreal day. We couldn’t have asked for things to go any better than they did. The love was thick in the air and I really feel like everyone had an amazing day. Relatives came in from out of town, new friends were made and family and friends enjoyed celebrating together. My brother looked quite dashing and Tasha was gorgeous. 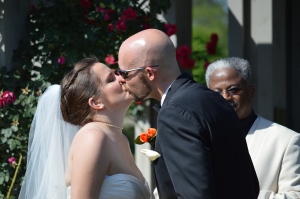 Wedding party! Yup I was a bridesmaid too!

If you remember back to last May, I posted about dark chocolate root beer cupcakes I had made for my brother’s birthday. Well, that’s kinddof what started what follows. He was so taken with his birthday cupcakes that he and Tasha asked me to make cupcakes for their wedding. Of course I said yes. Being a baker, I just couldn’t stomach the thought of someone else making their wedding treats!

After much testing, discussing and debating, I settled on doing the following three cupcakes for the wedding: 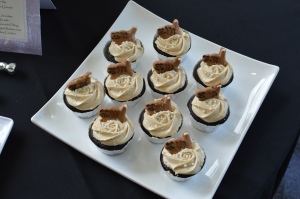 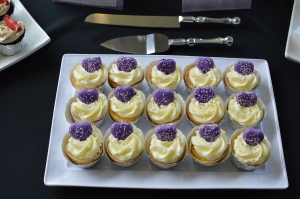 I also had to figure out what to make them to cut. I came across a giant cupcake pan/mold by Nordic Ware and new that was the way to go! I made a dark chocolate cake with caramel chocolate ganache filling and vanilla Swiss meringue buttercream. I piped the icing onto the top of the cake in rosettes and lined the sides with pirouette cookies. I fixed a lace ribbon around the whole thing, decorated it with a gum-paste flower bouquet and made a small bunting for the top. I am very proud of the way it came out. 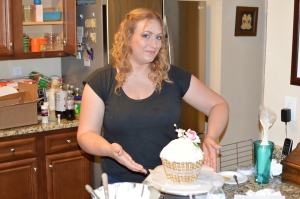 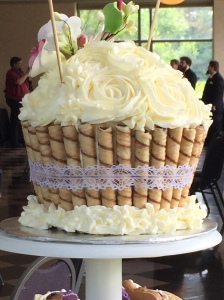 I used a large cupcake tower to display it all, with a few plates on the table holding overflow, and the giant cupcake on-top.

I have some issues too, with being a perfectionist and whatnot lol. I made the mini bunting for the top of the cake.

Also menu cards for the table.

My only regret about this experience is that I didn’t have business cards to handout. Both the wedding planner and the caterers asked me for my card. I have remedied that problem however! I received my first batch of “prototype” business cards in the mail today! I want to do some art of my own to put on the “final” card after my business has an actual webpage and whatnot. For now, this will be it! But I am very proud of the way things are going. I had people I had never met coming up to me at the wedding telling me how GOOD they cupcakes were. One woman said to me that she has tried so many cupcake places, especially down by NYC and mine blew them all out the water. She said she first tried the frosting and though, “wow this is good, i’m sure the cake won’t live up to it” but then was amazed when the cake was just as good. I am humbled and thankful for all of the positive feedback!

I did a bridal shower cupcake dress in April for a friend of mine which also came out really well. 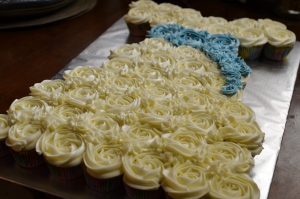 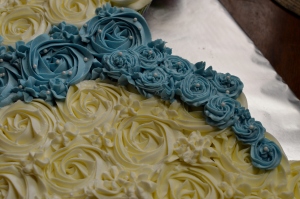 And I am making her wedding cake this month! Stay tuned for pictures of that… It will be a white cake with a lemon curd cream filling and lemon buttercream. That will be my project for the next week!

I’m so excited that things are building momentum! The thought that I could actually be baking FOR A LIVING in the future has seemed like just a dream for so long but it’s starting to feel like it could really happen… Wish me luck and thank you for stopping by! 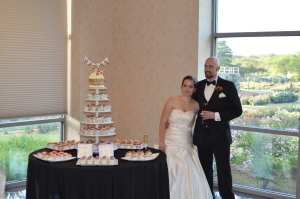 Aren’t they just so cute? ❤

One response to “My Little Brother’s Wedding”